Hey, friends! We are deep in the trenches of fall, and loving it! We’ve had a small cold snap for a few days, and it has started to get back to pretty warm in the afternoons, but the mornings and evenings are brisk and it’s wonderful! I actually wore a jacket to go to the park with the boys last night! One day it will cool off for keeps, and I will be so happy!

So, last week and this week Steven has been on a research rotation so he is working on research from home and I’m doing my normal schedule, even though last week was pretty light. I mainly had patients scheduled in the morning, and then worked from home writing the reports in the afternoon so we could hang out together at home last week. And, at the end of every afternoon, we found ourselves taking a little spontaneous adventure. So, this is a little overview of our adventures, kind of like a little “life lately” update for us.

Now, I feel like I should preface that part of surviving the life of medicine is adjusted expectations. Note that I said “adjusted” and not “lowered”. But, if you expect to live life like the rest of society (like, making plans whenever you want, or having lots of free time), you will be disappointed. And one of the smartest and most true statements I’ve ever heard was said in our Wednesday night small group last year and it will stick with me forever– “The root of all disappointment is unmet expectations”.

So, I say all that to preface that these are probably not big or fun or impressive things for the average person, but it was to us. When time together, or spare time in general, is a precious commodity, you learn that it’s not really about where you go or what you do, but rather who you are with, and having time together. So, here is a recap of our adventurous week!

On Monday, we didn’t go anywhere, so I don’t think it really counts as a day on Choose Your Own Adventure week. I made dinner when I got home from work (Mondays are always my most heavily scheduled day [boo, hiss], so I’m usually wiped when I get home), and we just binged some Netflix. We are in the middle of Narcos, and while I will say that we have watched it and found it very interesting, due to it’s heavy content of graphic violence, nudity, and other inappropriate subject matter, I won’t really put in a glowing recommendation here. If you are interested in Pablo Escobar and the history of the rise of the cocaine industry in Columbia, you might check it out, but just be warned!

On Tuesday, we packed up the labs and went to Waco (about 30 minutes from our house). The main item on the agenda was getting them water vests for duck season coming up at Cabela’s. We contemplated taking them, and did measure them ahead of time, but they both fell in between sizes on the measurement charts so it was good to have them there to actually try them on. The original brand Steven wanted didn’t have one in Ruger’s size (he’s on the smaller side for labs), so they ended up trying on multiple vests of each brand to make sure they were all right (which was definitely an adventure for everyone!). They wore them out of the store like little cutie patooties all ready for hunting season! (But mostly because they were already on and it would have been a lot of work to take them back off and then put them on again). Steven and I grabbed a quick bite to eat at Bubba’s (hello, delicious fried cheese!! 🙂 ), and then took the boys out to Lake Waco to try out their new swimmy suits. Lots of sizing videos on YouTube advised that you needed to buy these for your dog months in advance of duck season because it will take them a while to get used to moving with them and not be bothered with them. I’m not sure ours even noticed they had them on, quite frankly. They did everything they normally do, and never acted like anything was different. Their particular vests have padding on the sides to help function like a flotation device if they were to be in deeper waters, but the main purpose is to help trap in their body heat and keep them warm. Don’t they look handsome??? And one of Steven’s proudest moments came when we were walking back to the truck and a dove flew overhead– Gump caught sight of it and ran behind it like he was pretty sure he could grab it from the air. They have completely caught the hang of watching the sky for birds and “marking” their potential retrieves. 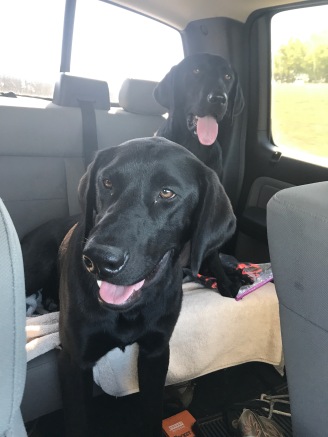 On Wednesday, I wrote reports at home for a while in the afternoon while Steven mowed the lawn 😉 .

I had mentioned to him a few weeks before that I had never been to College Station. His dad went to A&M, and his brother went to A&M med school, so he’s been several times, but I’ve just never had an occasion or reason to go, and driving through town on the way to Houston once was all I’ve seen. I’m not sure there’s a ton that is super interesting to see, but I was curious to see A&M and the town at least once. Once I finished my reports and he finished his outside work, we packed up the dogs again, and headed about an hour and fifteen minutes away to Bryan/ College Station. We got to town right at 5:00 and fought traffic over to the A&M campus, and then tried not to run over any students that were walking/ biking as we drove through campus. We passed by numerous engineering buildings and then Kyle Field before heading over to Torchy’s for some tacos. (It was nice and all, but I’ll maintain my biased opinion that Tech is one of the prettiest college campuses you’ll ever see… 😉 And if you disagree, talk to me at tulip time, or during Carol of Lights!). After dinner, we headed out to Lake Bryan and let the dogs swim for retrieves for a while as the sun went down. Lake Bryan is a nice, smaller lake, and they had a nice set up for different recreational activities that we enjoyed. 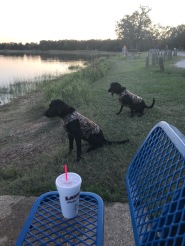 On Thursday, I finished up early, and took an epic afternoon nap before we ran a few errands, and then decided to head out to the dove lease for a while. Steven hadn’t really wanted to spend a lot of time out there because we hadn’t really seen many dove so far, but we decided to try a different field, and it seemed to make a difference! They (Steven, Ruger, and Gump) tromped through the weeds while I read my chapter for Bible study Friday morning and read the fall issue of The Magnolia Journal. We ended the night with In N Out Burger (including a chocolate milkshake to get Olivia moving and shaking) and finishing off the last 3 episodes of season 2 of Narcos (so we are officially done with Pablo Escobar). Since the labs get to go hunting, Boudreaux gets to hang out inside with us while we watch TV at night. He is usually found doing something like this…

On Friday, we headed back east to Cameron. When we went to College Station earlier in the week, we drove through Cameron, which is a smaller town about 30 minutes from our house. On our way in, we saw a billboard for Texas Burger, which is one of our all time favorites in Midland. I mean, literally the weekend before, we ate there and lamented that we didn’t have one close to us, and gushed over how much we love it. We were a little skeptical as to whether this would be the same, but IT WAS! We’ve had a Texas Burger about 30 minutes from us the whole time! So, we went on a Friday night date for chicken strips at Texas Burger. And they. were. delicious. And I see many more Texas Burger date nights in our future! We came back home and took Boudreaux on a little stroll around the neighborhood. 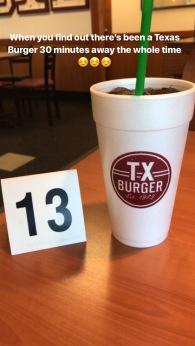 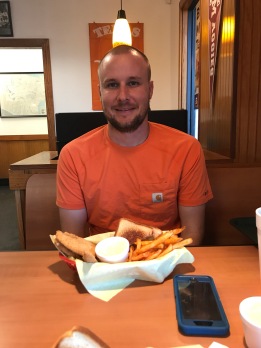 On Saturday, Choose Your Own Adventure Week culminated with us meeting my uncle, aunt, and cousins out at the dove lease for some skeet shooting and a little hunting. It was so much fun to get time with them! My uncle and I were really close when I was a kid, and it is so much fun now to get to hang out as adults with him and his family! Their two boys have pretty similar interests to what Steven and his brother had at that age, so Steven likes to hang out with them and talk fishing and hunting 😉 They didn’t get any birds, but we had some delicious tacos at Torchy’s afterward. They live about 2 hours from us, so we need to get together more often!

This week, I’m not sure exactly what adventures we’ll find ourselves on, but last week was so much fun! We’re planning to hit up a lake house at a nearby lake for the weekend if we can get a place lined up, and that would be the icing on the cake of the last two weeks. Either way, wherever we get to spend time together is the best place to be!

Linked with Erika for Tuesday Talk!

One thought on “Choose Your Own Adventure Week”

It’s the most wonderful time of the year and we kicked it off with a preschool Christmas program, a department Christmas party, a trip to see the zoo lights and a meeting with Santa this weekend!
Opening weekend of duck season and Livy’s first time duck hunting! 🦆🦆🦆
The best fall day- fun at the preschool fall carnival in the morning and fun at the pumpkin patch this afternoon! 🎃🍂🧡
We 🧡 fall weekends!

© Red Bank Life and [www.redbanklife.com], 2021. All text and photos are property of Red Bank Life and Morie Smith. Unauthorized use and/or duplication of this material without express and written permission from this site’s author and/or owner is strictly prohibited. Excerpts and links may be used, provided that full and clear credit is given to Morie Smith and Red Bank Life with appropriate and specific direction to the original content.

Disclaimer: some posts feature affiliate links, which are provided at no cost to you, and I may receive a small commission for your purchase. Thank you for supporting my blog!